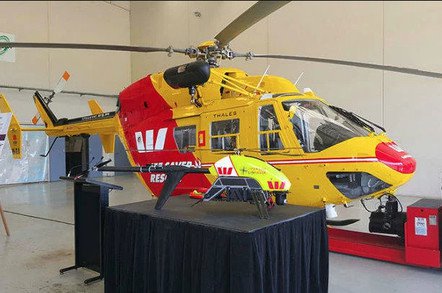 Only tits in this drama were the two kids in trouble

At 11.30am on Thursday, passersby alerted lifeguards that two people were in trouble in the sea off Lennox Head beach in New South Wales. The lifesavers just so happened to be in the middle of a training course on how to use drones to drop floatation devices on swimmers in trouble – and so got little real-world schooling.

Here’s a video of the lifeguard-piloted drone swoop over to the stranded youngsters and dropping an expanding doodad for them to cling onto, thus preventing them from going under and meeting their makers:

The camera-equipped drone, a Westpac Little Ripper, was purchased as part of a AU$430,000 ($345,000, £248,000) splurge on mini-copters by the NSW’s answer to Baywatch. The state’s deputy premier John Barilaro, who was on the beach for the launch of the new drone, praised the quick-thinking lifeguards and their remote-controlled rescue.

“This is a world first rescue,” Barilaro claimed, the Northern Star reports. “Never before has a drone, fitted with a flotation device, been used to rescue swimmers like this.”

The state’s lifeguard of the year Jai Sheridan was piloting the flying gizmo, dropping the inflatable directly onto the youngsters, who were about a kilometre away from the main swimming area. The two teens managed to grab hold of the floating podule, and made their way safely to shore using it.

“It took only 70 seconds from when the Little Ripper drone was launched to when it dropped the pod into the ocean for the rescue, a task that would usually take a lifeguard up to 6 minutes to complete,” said parliamentary secretary for Northern NSW Ben Franklin.

Presumably, the kids got a stern talking to about not becoming a statistic next time they fancy a dip. ®