A new report by OpenSignal puts Patna at top of the league table for 4G availability. It’s jumped ahead of the trendy tech hubs in the south and west of India with respect to 4G availability metric, which measures where users can get access to an LTE connection more of the time. India’s central and eastern regions saw more cities in the top ten of OpenSignal’s latest 4G availability metrics, as cities in other regions began to close the gap with the tech hubs of the south. “In our latest measurements, which covers the 90 days from December 1, 2017, we looked at the user experience of 4G availability in 20 of India’s largest cities. Four cities from India’s central and eastern regions – Patna, Kanpur, Allahabad, Kolkata, Bhopal and Lucknow – made it into our top ten,” said the report. 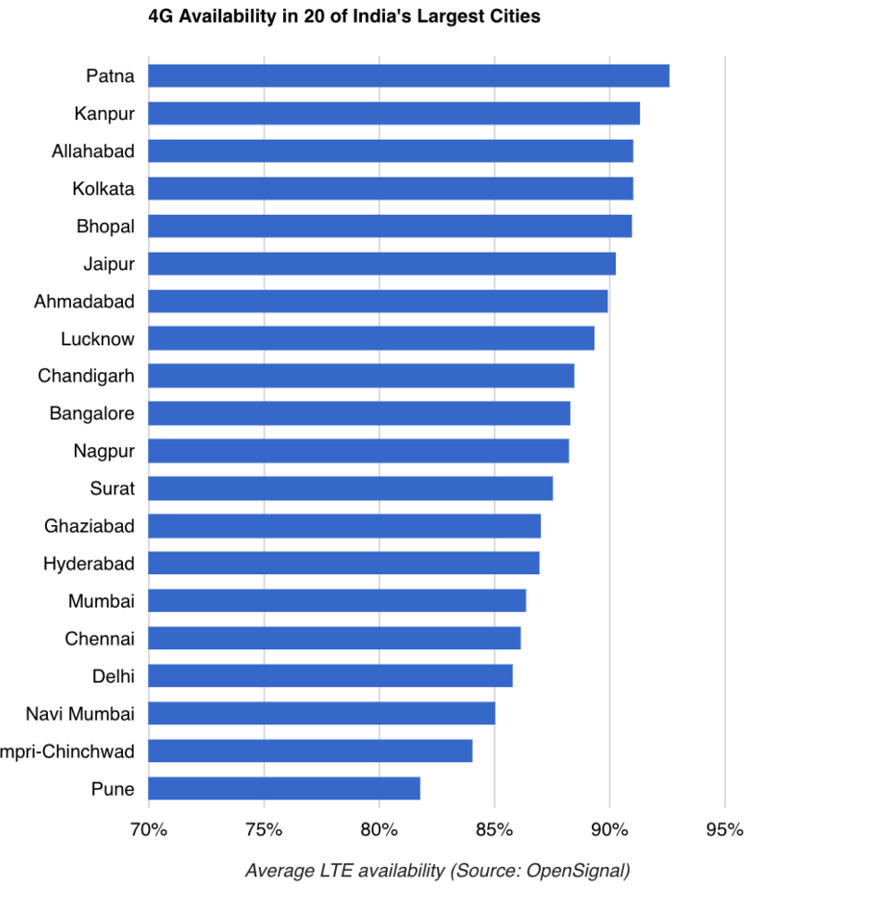 The disparity in 4G availability between India’s cities is also getting slimmer. “The difference in our 4G availability metric between top-placed Patna with 92.6% and 10th-placed Bangalore with 88.3% was just 4.3 percentage points. All 20 cities in our measurements have achieved 4G availability measurements of over 80% – a score we would expect to see in many of the worlds most mature 4G markets,” it said.

Having said that, another report by OpenSignal revealed that Navi Mumbai had the best 4G download speeds. Navi Mumbai registered average 4G speeds of 8.72 Mbps in OpenSignal’s latest measurements, which track average 4G download speeds among 20 of India’s largest cities between December and February. Elsewhere, second-placed Chennai saw its 4G speeds nearly double, jumping up from 4.4 Mbps in our last post in March 2017. At the other end of the scale, Allahbad was only city to register less than 4 Mbps with average speeds of just 3.5 Mbps.

Six out of the top ten cities were in the southern or western regions, with Chennai coming in second with average speeds of 8.52 Mbps, followed by Kolkata at 8.46 Mbps and Bangalore with 7.17 Mbps.

“For this chart we calculated speeds for 20 of India’s largest cities, but it’s by no means a comprehensive list of every city in India. So while Allahbah is at the bottom of the chart, this does not mean it is the slowest city in the country – it’s the slowest of the 20 cities we analysed,” said the report.

The shrinking disparity between the southern and western tech hubs and India’s other cities reflects the rapid growth of 4G in the country. Driven by fierce competition, India now has one of the most extensive 4G footprints in the world.

“The growth in availability of LTE in the country is particularly remarkable, as users were able to connect to an LTE signal over 86% of the time, a rise of some 10 percentage points from a year earlier. The market is still feeling the aftershocks from the debut of Reliance Jio, and with three mobile mergers on the table, our city rankings for 4G availability are likely to see further significant shifts in the coming months,” it further added.