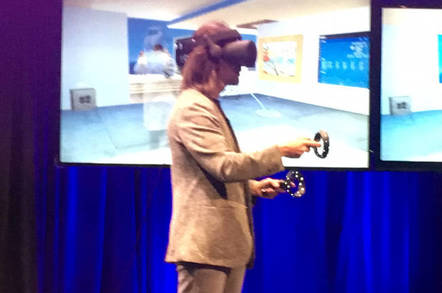 Alex Kipman, a technical fellow with Redmond’s operating system group, demonstrated for El Reg and other assembled tech hacks a 3D user interface within Windows Mixed Reality, which lets you run and use applications using a VR headset. This so-called “Cliff House” user interface presents apps as objects in various rooms of a home for you to find, touch and launch, and was shown off in previous demos that we’ve covered.

“We didn’t want to just build a new OS, we wanted to build a deeply human way of operating,” Kipman said. “For us, space is everything. In fact space is the ultimate interface.”

Yeah, well, for us, it’s like the 1990s all over again with 3D GUIs attempting a comeback albeit with more powerful and capable hardware. It’s like an immersive Microsoft Bob. Anyway, Cliff House wasn’t today’s news. For the past few months, Microsoft has been showing off that UI and hardware support for VR headsets in Windows 10 – hardware support to basically let you swap your touchscreen, monitor, mouse and keyboard for goggles on your head and wireless paddles in your hands, if that’s your thing.

Today’s news was the unveiling of Microsoft’s latest acquisition: virtual meetings software developer AltspaceVR. The terms of the biz gobble were not disclosed.

The AltspaceVR software allows users to communicate with avatars of one another in virtual meetup spaces, and while most of the mixed-reality offerings are focused on gaming and 3D design tools, Kipman sees the collaboration tool as a killer app for mixed reality in the enterprise. Mixed reality is the result of blending computer-generated graphics with real stuff your eyes should normally see, all within the VR headset.

“Mixed reality gives you the superpowers to transcend time and space,” he explained. “That is the killer experience, it is communication.”

Having said all that, games are still the big draw for mixed reality, and Microsoft is making its pitch to developers by opening up to the public a preview of the SteamVR service for Windows Mixed Reality, and that’s due to land before the holidays.

While Microsoft is planning to continue to develop its mixed reality technology, and add more hardware vendors – including Samsung, which will begin shipping its first Windows geek-goggles in November – don’t expect the Mixed Reality project to jump to the Xbox family any time soon. Kipman said that, barring further advances in the technology, the prospect of top-quality virtual reality in the living room via a console simply doesn’t work very well. There’s too many wires, not enough space, too much faff involved, basically.

“We just don’t believe, right now, the state of the art in VR is such that it is an enjoyable experience,” he said.

So how does it work?

Following the showcase event, El Reg took a spin on the Windows Mixed Reality via a demo unit – in this case a Dell headset. As with previous demos, the interface takes a bit of getting used to and can be a bit clunky at times as you try to decipher whether, for example, you’re supposed to use a button on the handset or a movement gesture to interact with an object.

Once you slip into the groove, though, things definitely get immersive. The Halo: Recruit demo was particularly cool and immersive as the handheld controls became a pair of guns that you point to shoot at enemies in a particularly badass fashion.

That immersiveness, however, is also the limiting factor for Windows Mixed Reality. As your eyes, ears, and hands are occupied in the operation, multitasking or even loosely paying attention to the outside world is difficult. Your humble hack found it hard to even listen to his Microsoft handler, who became a disembodied voice once the set was turned on.

Forget trying to, say, take a drink of water or listen for a phone call while you’re in VR mode. That alone will limit the impact of mixed reality for much of anything outside of gaming for most users. ®