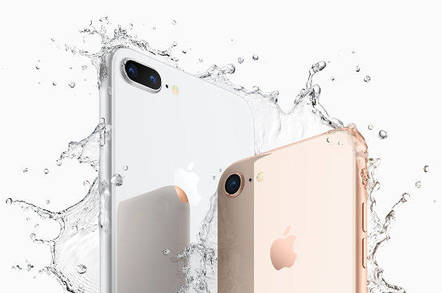 Mystery of disappearing photos solved, too

The iOS 11.0.2 release consists of a trio of fixes that were reported by fans shortly after the arrival of version 11.0 of the operating system and iPhone 8 and 8 Plus last month.

Most notably, the firmware update removes the “crackling” sound iPhone 8 and 8 Plus owners had been suffering on voice calls. Apple claimed the now-resolved noise problem only affected a “small number” of its latest handsets.

Also patched was an iOS 11 issue that would cause some photos to be erroneously marked as hidden, and separated from the main photo album, and a bug that had prevented users from opening some attachments in S/MIME encrypted email messages. This week’s 11.0.2 update also includes the 11.0.1 bug fix that corrects connectivity issues between iThings and Microsoft-powered email systems, which were present in the 11.0 launch release.

For those who have not yet updated to iOS 11, jumping to 11.0.2 will also get you the security updates Apple delivered with the original iOS 11 rollout.

In other words, if you have been waiting to move to iOS 11 and its associated security fixes due to stability concerns, you’ve got three fewer reasons not to now.

According to estimates from analytics company Mixpanel, iPad and iPhone owners have thus far been eager to upgrade to the new iOS, as around 39 per cent of devices it spotted are already using the new firmware.

Most devices still in use will be able to upgrade, as Apple said iOS 11 will run on any iThing running a 64-bit processor. This would include any iPhone 5S (released in 2013) or newer, and the iPod Touch 6. The 64 bit iPads include the iPad Mini 2 or later, all iPad Airs, all iPad Pros, and the 5th generation or later iPad line.

Meanwhile, Apple is now less than a month away from delivering its super-premium iPhone X model. The $999 handset will open up for pre-orders on October 27 and formally hit the shelves (and mailboxes) with general availability on November 3. ®