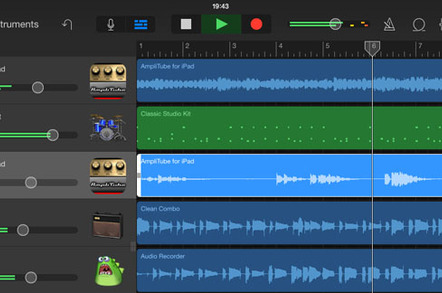 The iPhone maker says fans have reported the music-making application no longer launches properly after installing the new iOS update with iCloud integration switched on. Disabling iCloud access for GarageBand, through the iCloud menu in Settings, allows the application to run, but users won’t be able to access any GarageBand songs stored on iCloud.

This leaves GarageBand crippled for many Cupertino loyalists who had relied on iCloud to back up and save their projects, particularly those who have transitioned from a notebook computer to an iPad as their primary machine.

Not surprisingly, folks are less than happy with the matter…

“Apple is aware of the issue, and is investigating solutions,” said the idiot-tax operation. No timeline has been given for when that update might arrive.

Those who rely on GarageBand, obviously, will want to wait a bit on installing the iOS 11 update, which is not great because the software includes security fixes.

The GarageBand problems are the latest in a series of high-profile bugs and errors that have emerged since iOS 11 arrived last month. First, there were the reports that updated phones were unable to connect to Microsoft Office and Exchange mailboxes. Then, some users found that the new iOS made their phones emit a strange crackling sound during voice calls, prompting Apple to kick out a quick patch.

If the Apple-induced bugs weren’t bad enough, there are also the countless number of old 32-bit apps that no longer work with the 64-bit-only iOS firmware. ®

Is the Technics SL-1200GR Suitable for DJs?